Religious Freedom in the World Report 2016

Usually a peaceful religion – but in Burma Buddhists have attacked other faiths.

This Amadiyya Muslim shopkeeper was slain in Glasgow.

These Yazidis fled horror at the hands of Daesh (ISIS). 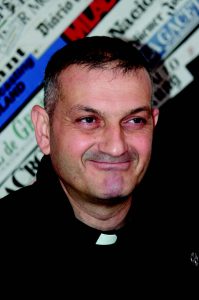 The importance of religious freedom is for me the difference between life and death. I am a Catholic priest from Syria and I am devoted both to the survival of Christianity in this, our biblical heartland, and to the cause of building trust and understanding between Christians and Muslims. On 21st May 2015, I was kidnapped in Syria by Daesh (ISIS) and was imprisoned in Raqqa, which they have made their capital. For 83 days my life hung in the balance. I feared every day would be my last. On the eighth day, the wali [governor] of Raqqa came to my cell and invited me to consider my captivity a kind of spiritual retreat. These words had a great impact on me; I was astonished to see God was able to use even the heart of a high official of ISIS to deliver a spiritual message to me. This encounter marked a change in my inner life and helped me throughout my imprisonment. Later, I was moved back to my city, Qaryatayn, and from there was able to make it to freedom, thanks to the help of a Muslim friend from the region. I could so easily have given in to anger and hatred for what happened to me. But God has shown me another way. All my life as a monk in Syria, I have sought to find connections with Muslims and to learn from one another. I am convinced that over the past years, our commitment to help all the needy of the region of Qaryatayn – both Christians and Muslims – was the reason why 250 Christians and I were able to make it back to freedom. Our world teeters on the brink of complete catastrophe as extremism threatens to wipe out all trace of diversity in society. But if religion teaches us anything it is the value of the human person, the need to respect each other as a gift from God. So, surely, it must be possible both to have a passionate faith in one’s religious beliefs as well as to respect the right of others to follow their conscience, to live out their own response to the love of God who made us all. I am profoundly grateful to Aid to the Church in Need, the charity that continues to give so much emergency and pastoral help to our suffering people, for their commitment to the cause of religious liberty. That commitment has borne fruit in this 2016 Religious Freedom in the World report. If we are to break the cycle of violence threatening to engulf our world, we need to replace war with peace. In this day and age more than ever, it is time to cast aside religious hatred and personal interests and learn to love one another as our faiths call us to do.

Aid to the Church in Need is a Pontifical Foundation of the Catholic Church. Each year we fund around 5,000 projects in over 140 countries around world, helping to support the Church in its mission, and bringing hope and solidarity to millions of people. Find out more